Top image: Her Majesty Queen Sonja presented the Royal anniverary gift to UNIS: A graphic print produced by the Queen herself. In the back (from left): UNIS director Harald Ellingsen, His Majesty King Harald and Longyearbyen Mayor Arild Olsen. Photo: Petter Wangberg Sele/UNIS).

Their Majesties together with Their Royal Highnesses Crown Prince, Crown Princess, and Princess Märtha Louise had a half hour visit at UNIS in connection with our 25th anniversary this year. Their Majesties also brought along their grandchildren, so the whole Royal family was gathered in the UNIS cafeteria this morning.

“Ice cave” is a graphic print based on a photo the Queen took in 2006, when she visited a melt water channel in Scott Turnerbreen, a few kilometers outside Longyearbyen. She used the photo as basis when she worked with renowned Norwegian artists Kjell Nupen and Ørnulf Opdahl, and created a graphic print she entitled “Ice cave”. 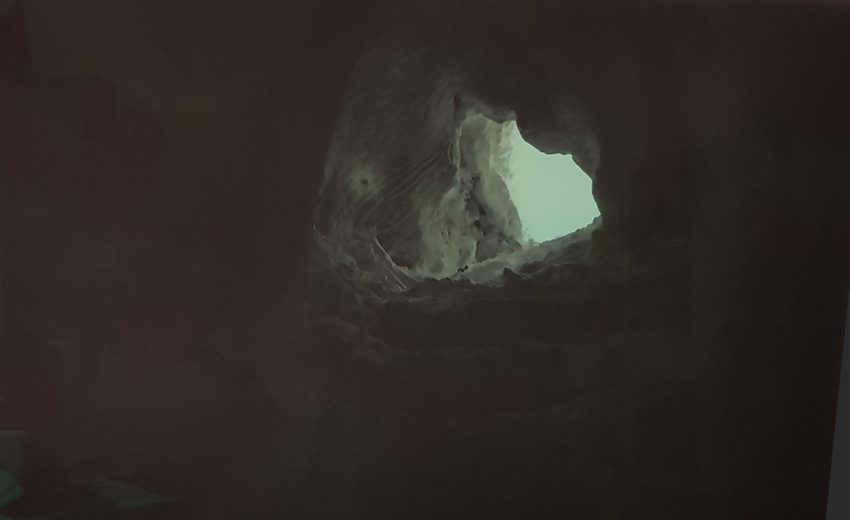 “Ice Cave” is a graphic print made by Queen Sonja, inspired by a trip to Scott Turnerbreen in 2006. Photo: Eva Therese Jenssen/UNIS.

– UNIS will be an important part of Longyearbyen’s future
Afterwards the Royal family visited Svalbard Museum and the visit was concluded with a short press brief outside the Svalbard Science Centre. The King was asked what he thought of the changes Longyearbyen is going through as the mining operations are shutting down.

– I think it is challenging and I think UNIS will be an important part of Longyearbyen’s future, the King said.

With the official Royal visit today, UNIS has kick-started our birthday celebrations. In October UNIS will have a celebration weekend 18-20 October to mark our 25th anniversary.