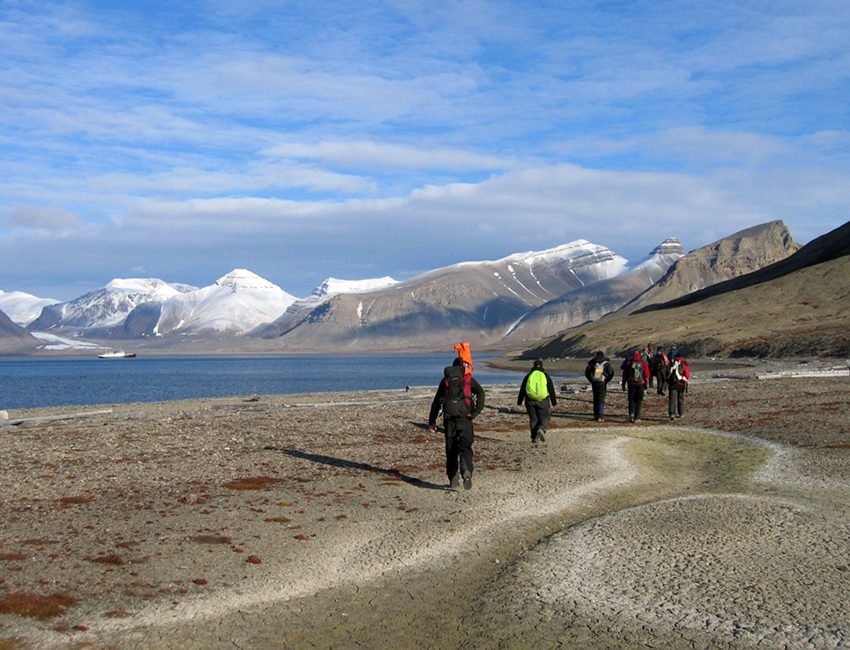 Our research is organised into three key areas: Arctic Basins, the Quaternary and the Cryosphere.

The stratigraphy of Svalbard records environmental changes across a fairly continuous succession of Precambrian metamorphic rocks, to Palaeozoic and Mesozoic sedimentary rocks, and then to Paleogene and Quaternary strata. The landscape exhibits exceptionally well-exposed geological sections on the slopes of glacially eroded fjords and valleys, where long and continuous sections exceeding 100s of metres in height can be found. These facilitate studies of the geological evolution of large-scale structural elements and tectonic controls, fold-and-thrust belt developments, basin analysis and sequence stratigraphy, hydrocarbon formation and changes in the sedimentary depositional environments through geologic time.

Svalbard’s geographical location, at the northernmost end of the North Atlantic Drift, makes it extremely sensitive to regional North Atlantic climate changes. Quaternary sediments in marine and terrestrial settings therefore offer excellent opportunities to study the Late Quaternary development of climate, glaciation and sea-level. With ca. 57% glacier cover and continuous permafrost dominating the rest of the land surface, we also have an ideal natural laboratory for studying present-day glacial, periglacial and permafrost processes. We do this from physical, chemical and biogeochemical perspectives.

Blue Ice Oases of Microbial Life on the Antarctic Ice Sheet (BIOICE)
Funded by the Research Council for Norway and led by UNIS.
https://www.coldregionscience.com/bioice

Changes at the Top of the World through Volcanism and Plate Tectonics (Norway-Russia-North America collaboration (NOR-R-AM). Funded by the Research Council of Norway and led by the Centre for Earth Evolution and Dynamics (CEED) at the University of Oslo.
https://norramarctic.wordpress.com

Climatic forcing of terrestrial methane gas escape through permafrost in Svalbard (CLIMAGAS)
Funded by the Research Council of Norway and led by UNIS.
More info (PDF).

Jurassic-Lower Cretaceous basinal studies of the Arctic region (JuLoCra). Funded by industry partners and led by the University in Stavanger and UNIS.
https://wp.ux.uis.no/julocra/

Landscape & infrastructure dynamics of frozen environments undergoing climate change in Canada, Norway and Svalbard (FROZEN CANOES)
Funded by the Norwegian Research Council and the Centre for Internationalization of University Studies in Norway. Led by Norwegian University of Science and Technology.
https://www.ntnu.edu/ibm/frozen-canoes

Research Centre for Arctic Petroleum Exploration (ARCEx)
Funded as a PETROSENTER by the Research Council for Norway, six industrial partners and in-kind contributions from ten research partners, led by the University of Tromsø.
www.arcex.no

Sedimentary Response to the Growth of major extensional fault systems (Suprabasins)
Funded by the Research Council of Norway and four industry partners, led by the University of Oslo.

Svalbox
Funded by the University of the Arctic and UNIS, led by UNIS. Project duration: 2016-forever.
www.svalbox.no

Svalbard Rock Vault
Funded by Research Council of Norway and led by UNIS and SNSK.
http://www.svalbox.no/srv/#

Projects that continue to influence our research outputs include:

Triass North: The Development of the Barents Sea in the Triassic
Funded by the Research Council of Norway with five industrial partners and led by the University of Oslo.
https://www.mn.uio.no/geo/forskning/prosjekter/triasnorth/