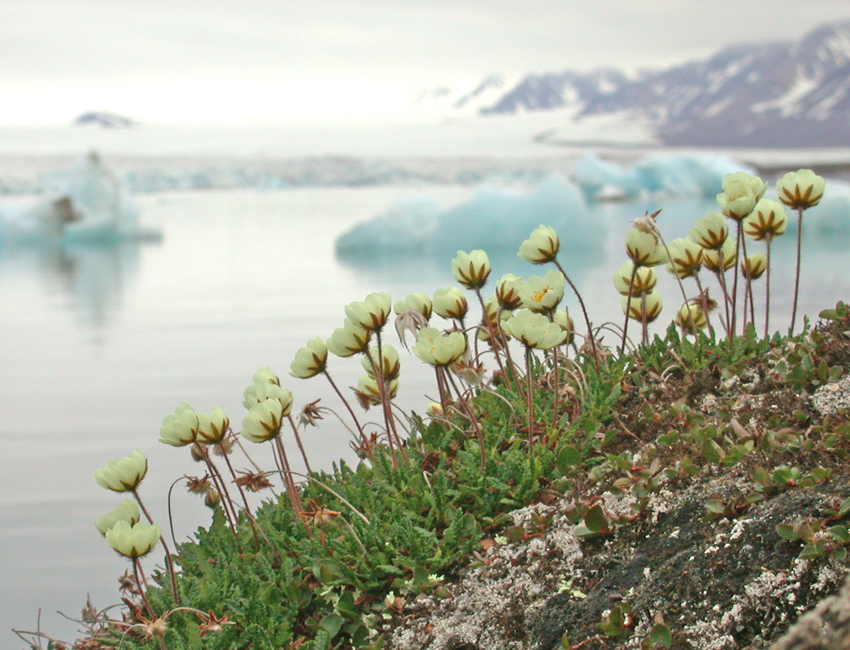 Research done by associate professor Inger Greve Alsos (now at UNIS) and co-workers at the National Centre for Biosystematics shows that plants have spread frequently in the Arctic and that an increase in temperatures may result in that many new plants species pop up in Svalbard.

An important question these days is how the arctic flora is affected by global warming. Inger Greve Alsos and the research group led by Christian Brochmann at the National Centre for Biosystematics, Natural History Museum in Oslo, have, together with colleagues from the University of Tromsø, Norwegian University of Life Sciences and Université Joseph Fourier (France), analyzed DNA in nine plant species in Svalbard.

In total 4439 samples from 532 plant populations from the circum-arctic area were analyzed and compared, and many of the plants were sampled in difficult accessible regions.

The results show that plant colonization of Svalbard has occurred repeatedly and from several regions. The study will be published in Science this week.

Frequent long-distance dispersal in the past
There has been a long debate in the scientific community whether or not plant seeds have the capacity to spread across large oceans and arrive at Svalbard. A popular opinion has been that the flora in Svalbard has survived the last ice age there. However, the geological records of Svalbard show that the ice cover during the last glacial maximum was so extensive that it excluded the survival of most, if not all species.

– This study shows that long-distance dispersal has been more frequent than previously assumed and that the current plant species in Svalbard arrived repeatedly and from different source regions. We can assume that such dispersal will occur also in the future, with a warmer Arctic, and we can assume that more plant species will establish in Svalbard, Alsos says, adding that the study gives important information for modeling distribution under different climates.

Less dispersal from the south
The study shows that the plant colonization route to Svalbard did not follow the main bird migration routes, which are from the south. Rather, the species arrived from Russia and to a lesser extent from Greenland. These areas are connected to Svalbard by sea ice during winter. This finding suggests that sea ice or a combination of sea ice and wind are important dispersal mechanisms in the Arctic.

– This was a surprising result, as the main bird migration route is from Scandinavia to Svalbard, and it would be expected that many seeds would come from the south. However, our study suggests that the sea ice may play an important role in seed dispersal in the Arctic, and this is something we want to investigate further, Alsos says.

There is also a need to increase this kind of study to include more species, and also other kinds of organisms according to professor Alsos.

The Frozen Five are back!

Fencing in on climate issues