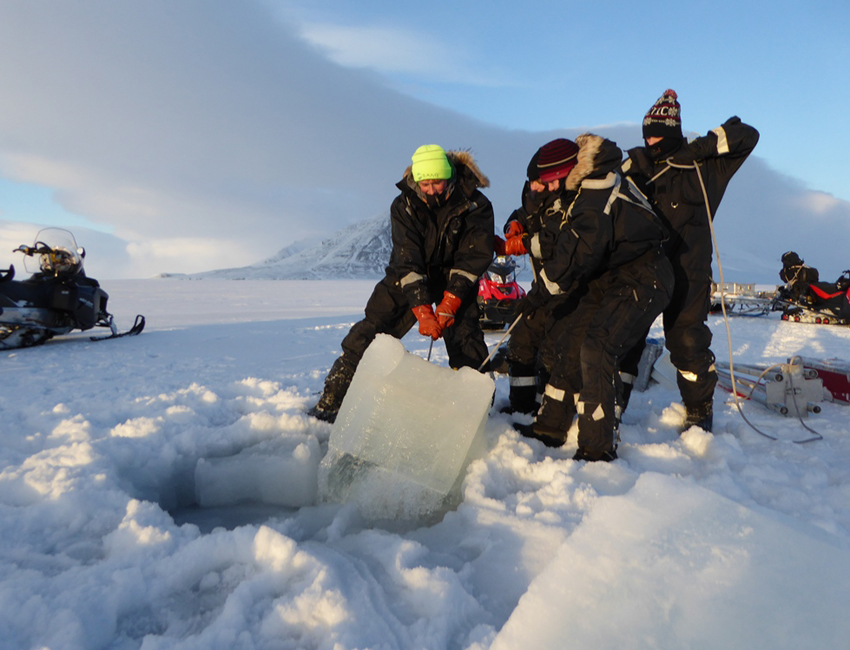 Top image: Every year, UNIS students go to Van Mijenfjorden to sample physical and biological parameters of sea ice and the water below as part of the bachelor course AB-202 Marine Arctic Biology. Here we see students making a hole in sea ice in 2015, when the small hydroid S. tuuli was found for the first time in sea ice in Svalbard. Photo: Janne Søreide/UNIS.

We don’t know much about the tiny algae and animals living inside sea ice. Microscopic sea ice animals are rarely identified to species level because many of these tiny critters are larvae of pelagic and benthic species and look completely different from the adults. We simply don’t recognise them.

Sympagic meiofauna: that is the name we give to animals in the size range 20-500 µm that live in sea ice. There are a lot of them, and some of them are larvae. Today, DNA barcoding makes it possible to reliably identify the species of these larvae – provided the species is represented in one of the reference databases where all publicly available DNA sequences are gathered (e.g. GenBank). However, very few marine invertebrates have been sequenced so far, so a huge, important task remains to be done to map Arctic marine biodiversity.

Mapping sea ice-associated flora and fauna is particularly urgent, since summer sea ice may disappear in the near future.

Why is sea ice a good place to live?
In spring, microscopic algae grow inside sea ice. These highly specialised ice algae can grow almost without light and can bloom up to two months earlier than phytoplankton in the water column below. That makes ice algae a critical early food source for many Arctic marine invertebrates, giving them a head start on reproduction and growth. That’s important at high latitudes where the productive season is short. In addition to being a well-filled “food-plate”, sea ice also offers protection from predators. Sea ice is not solid, like freshwater ice. It contains a network of tiny brine channels due to exclusion of ions while freezing. Since space is severely restricted (diameter from micro- to millimetres) many predators do not have access to this habitat. This combination of high food concentrations and low predator pressure makes it worthwhile spending “extra calories” to compensate for the extreme temperatures and salinities in sea ice brine channels.

The ice–water interface (underside of the sea ice) has the highest densities of ice algae (brown colouration) and sympagic meiofauna. The hydroid S. tuuli recorded in Svalbard was found in the lowest 3 cm. The temperatures and salinities are less extreme here since this bottom section is in close contact with the water below, which also provides “fresh” nutrients. Photo: Janne Søreide/UNIS.

Sympagic meiofauna in Svalbard
In Svalbard, reduction in coastal sea ice is particularly severe and today most West Spitsbergen fjords are largely ice-free year-round. What this means for hundreds of thousands unknown, tiny critters living inside sea ice is an unresolved mystery. Since 2014, the University Centre in Svalbard (UNIS) has regularly studied the sea ice meiofauna community in Van Mijenfjorden, western Spitsbergen, through UNIS student courses and projects with support from the Fram Centre and Svalbard Science Forum (Arctic Field Grants).

Sea ice can be viewed as an upside-down benthic environment where the brine channel system corresponds to the interstitial habitats in a sandy seabed. Especially in coastal, shallow regions, there is a close biological coupling between sea ice and the sea floor. 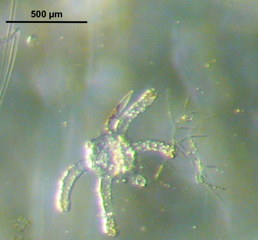 The one specimen of Sympagohydra tuuli found in Svalbard April 2015 (from Marquardt et al. 2017). This delicate and naked hydroid is almost spherical when contracted and tubular when relaxed to its maximum length. It has four oral tentacles which can be extended to three times their length. The tips of these tentacles can be slightly orange Photos: Miriam Marquardt/UNIS.

Preliminary studies in Svalbard suggest that sea ice may be an important nursery habitat for larvae of benthic animals. Up to 2 500 polychaete larvae have been found per square metre of sea ice in the innermost parts of Van Mijenfjorden. Whether these represent one species or several is currently under taxonomical and molecular analyses.

In 2015, we discovered two cnidarians in the bottom 10 cm of sea ice in Van Mijenfjorden. Now, molecular analyses have confirmed our morphological identification of one of these cnidarians as the hydrozoan Sympagohydra tuuli – the first ever recorded in the Svalbard archipelago. This ice-living hydroid was first discovered in Barrow (Alaska) in 2003. In 2008, it was recognized as a new species, and shortly after, it was found in both fast ice and pack ice in the Western Canadian Arctic and in the Central Arctic Ocean.

This small (0.2 to 1.1 mm) hydroid has a unique combination of characteristics that distinguish it from other known hydroids. It is therefore assigned to a new family Sympagohydridia under the hydrozoan subclass Hydroidolina, order Anthomedusae, suborder Capitata.

The genus name Sympagohydra was chosen because it is an ice-associated (=sympagic) hydroid, while its specific name was in honour of Tuuli, the newborn daughter of Bodil Bluhm and Rolf Gradinger, who first discovered this species. Bodil and Rolf recently moved to Tromsø where they work as professors at UiT The Arctic University of Norway. This is very fortunate for the Fram Centre institutions and today UiT, UNIS, the Norwegian Polar Institute and Akvaplan-niva collaborate closely to expand knowledge on sea ice meiofauna in the European Arctic.

What we know about Sympagohydra tuuli
The finding of Sympagohydra tuuli in Svalbard, European Arctic, is important as it confirms the circumpolar distribution of this species. Still little is known about its life cycle. Its presence in coastal sea ice over shallow depths suggests a bentho-sympagic life strategy (alternating between the seabed and sea ice). However, the findings of reproducing S. tuuli in sea ice in the central deep (>3000 m) Arctic Ocean, combined with its high tolerance to changing temperature and salinity suggest that it is an autochthonous sympagic species (which means it is native to the ice and lives its entire life there). Still, the occurrence of S. tuuli in seasonal fast ice in Western Svalbard with no direct connection to the multiyear ice pack of the Arctic Ocean challenges this latter theory. A sympago-pelagic life strategy cannot be ruled out either, due to records of this species in the open water just below newly forming sea ice in the deep Central Arctic Ocean.

Sympagic meiofauna mainly grazes on ice algae, but they may also feed on the rich and diverse microbial community that exists in sea ice. Direct evidence of predatory sympagic meiofauna did not exist until it was demonstrated that S. tuuli preys upon copepod nauplii of almost the same size as itself. Moreover, the few records of cnidarians in sea ice may not be representative of its true numbers. Most analyses of sea ice meiofauna have been conducted on preserved samples in which several meiofaunal taxa, cnidarians, in particular, are known to be poorly preserved. Consequently, they may have been unrecognised or simply overlooked, as they are rather small and nearly transparent. The ecological role of S. tuuli in the sympagic ecosystem may thus be significant even if the species appears to be rare judging from the data we have to date.

Plans for 2018
Preliminary data indicate greater sympagic meiofauna biodiversity in Eastern than in Western Svalbard. In 2018, we, therefore, aim to follow the seasonal development of the meiofauna community in Storfjorden, Eastern Svalbard, in cooperation with the Norwegian Polar Institute. They have been monitoring sea ice there since 2007, but so far they have focused on physics and not on sea ice biota!

Funding
This study was supported by the Fram Centre incentive fund (Project EcoCice, RiS no. 10612), an Arctic Field Grant (RiS no. 10641 for V. Pitsui) and the Norwegian Biodiversity Information Centre project GooseAlien (47-15, 70184235 for S. Majaneva).

Fram Forum
This article is produced for the magazine Fram Forum 2018. Fram Forum is published once a year and aims to inform the general public about the wide range of activities that take place in the Fram Centre institutions.