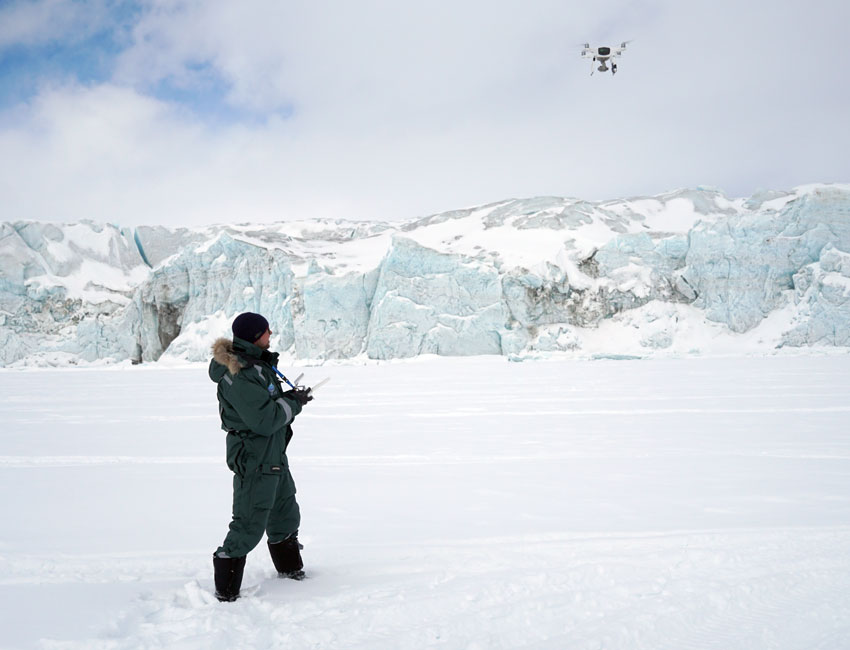 Many of the glaciers in Svalbard are heavily crevassed. A multidisciplinary research group is now using drones to create high-resolution maps of glacier surfaces to study how crevasses influence the rate of heat exchange with the atmosphere.

A glacier is a large mass of snow and ice that is slowly, but constantly, moving under its own weight. As glaciers flow along the underlying landscape, the ice masses experience different levels of stresses, that can lead to the formation of crevasses. Crevasses are deep cracks in the ice that can be very dangerous when traveling on glaciers.

Crevasses may actually not only be a risk for humans, but also pose a threat for the glaciers themselves. In a multidisciplinary research project between the University Centre in Svalbard (UNIS) and the Norwegian University of Science and Technology (NTNU), we are now studying how the occurrence of crevasses can affect atmospheric heat exchange and potentially increase melting rates. Heat exchange is a term used to describe the process of how the air temperature affects the temperature of the glacier surface and vice versa. Because a crevassed glacier has a rough surface, with many obstacles for the wind, it will adapt its temperature faster to the atmospheric temperature than a smooth glacier would. In combination with rising air temperatures in the Arctic, this is an important process that can lead to increased melting rates of crevassed glaciers. 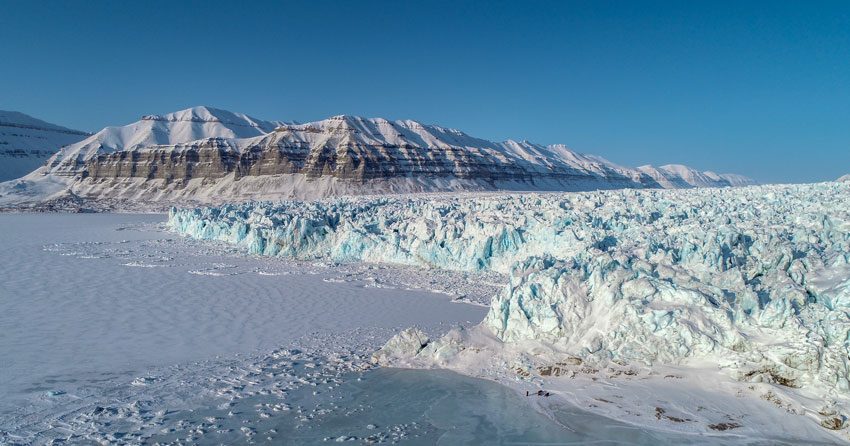 Professor Andy Hodson (UNIS) who has experience with glaciers in both Svalbard and Antarctica, is interested in how crevasse fields found at the front of tidewater glaciers in Svalbard influence meltwater production. Together with associate professor of meteorology Marius Jonassen (UNIS), and PhD candidate Richard Hann (NTNU), they came up with a novel way to answer this research question.

Unmanned aerial vehicles (UAVs) are a great tool for studying glaciers because they can do this from a safe distance. The research group drove with snowmobiles to several field sites in Svalbard and flew their drone, taking pictures of crevassed glaciers. This spring, they have visited Tunabreen, Fridtjovbreen, and Mohnbukta. The pictures are processed with a photogrammetry method to create 3D models of the crevassed glacier surfaces. These 3D models give a lot of information about the size, depth, and distribution of crevasses. This data can be used for simulations to investigate how each crevasse field influences the wind, how much turbulence is created, and – most importantly – how it can increase the heat exchange between glacier and atmosphere. To validate the simulations, the drone is also used to take vertical profiles of wind speed and temperature.

The research project has now finished their spring campaign and will start to evaluate the collected data. More fieldwork is planned for the summer, when the snow cover on the glaciers has disappeared. Further information on the project can be found on the Research in Svalbard database (RIS-ID 11148).

Preliminary results for the 3D model and the digital elevation model (DEM).