Dissertation on the Paulabreen glacier surge

Dissertation on the Paulabreen glacier surge

Top image: The heavily crevassed front of the glacier Paulabreen after Skobreen (in the middle rear end of picture) started surging into Paulabreen. Photo: Lene Kristensen/UNIS.

Lene Kristensen’s PhD work has been on the surging glacier Paulabreen in inner Van Mijen fjorden. Kristensen captured the progress of the surge on camera, and it is the first time image documentation of an ongoing glacier surge has been recorded. She will defend her PhD thesis on 14 December at UNIS.

Svalbard glaciers differ from glaciers found in other parts of the world. By definition, a glacier surge is a glacier that increases its speed up to 100 times and therefore usually advances very fast forward for a shorter period of time.

In Svalbard the majority of glaciers are believed to be of the surging kind, which means that they surge for a couple of years, before it starts melting (“retreating”) for a several year period. These kinds of surges occur regardless of climate factors.

Lene Kristensen’s PhD focuses on a surging glacier and how the glacier surge affects the landscape under and in front of the glacier. The title of the dissertation is “Glacier surges and landforms in a permafrost environment at the tidewater glacier Paulabreen, inner Van Mijenfjorden, Svalbard”.

A surge captured on film for the first time
In 2005 a tourist guide notified UNIS that the glacier Paulabreen was starting to move. Kristensen, with the support of the coal company Store Norske, put up a camera which took one image per day of the surging glacier. This footage was made into a movie clip, and is as far as we can establish, the first time a surging glacier is documented on film.

The front of Paulabreen moved rapidly into the fjord-arm Rindersbukta in Van Mijenfjorden. The velocity during the summer was around 10 m/day. The surge itself took place in Skobreen, which is a tributary glacier to Paulabreen.

Satellite- and airplane images have also been used for further description of the surge. Through several visits to the glacier area during and after the surge, it was possible to observe how the glacier affected and formed the surrounding landscape. 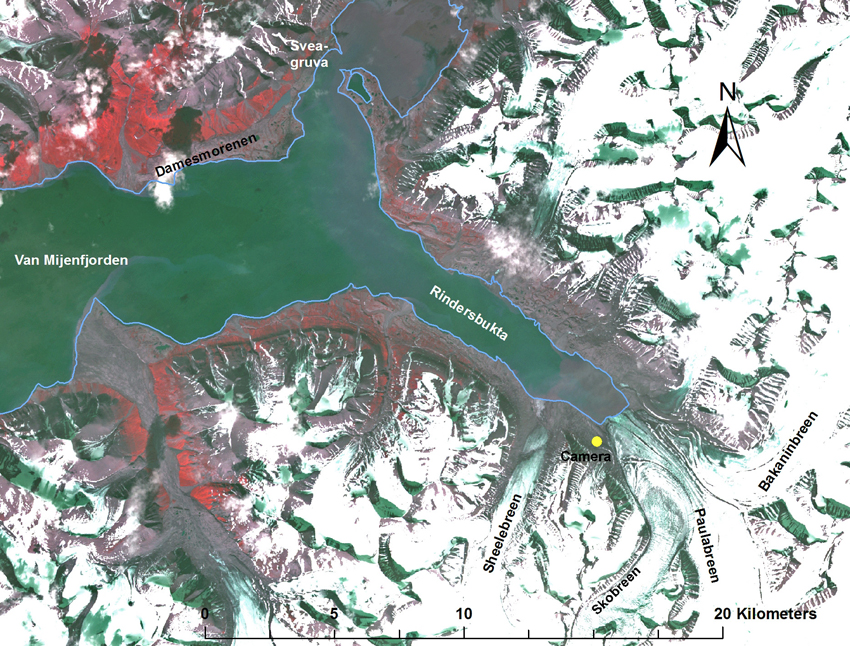 Map of the surge area in Van Mijenfjorden and location of the camera. Ill: Lene Kristensen/UNIS.

Meltwater channels affect surging glaciers
When a glacier at Svalbard starts surging, the permafrost layer underneath the glacier will start melting and further increase the water pressure. This causes a reduction in the friction with the ground and the glacier can surge forward at a higher speed.

Landscape tells of past surges
The moraine landscape in the inner part of the Van Mijen fjord shows that Paulabreen has in the past been about 25 kilometers further out in the fjord that it is today, due to a larger surge which took place some 600-700 years ago. The inner structure of the moraine has been investigated using geophysical resistivity measurements, where the electrical resistance in the ground is measured in a profile.

The thesis: “Glacier surges and landforms in a permafrost environment at the tidewater glacier Paulabreen, inner Van Mijenfjorden, Svalbard” will be defended at UNIS on Monday December 14th. Lene Kristensen will give a trial lecture called “Glacier – permafrost interactions” the same day at UNIS.

About the candidate:
Lene Kristensen (35) is from Denmark and completed her Cand. Scient degree in natural geography at the University of Copenhagen in 2003.

Kristensen was employed in a project position at the Royal Danish Administration of Navigation and Hydrography, before she started on her PhD degree at the University of Oslo and UNIS.

The end of the drilling

The oldest remains of a polar bear ever discovered