Will there be ice on the Svalbard fjords this winter?

Will there be ice on the Svalbard fjords this winter?

Last winter we had record-low amount of fjord ice here in Svalbard and the following autumn was unusually warm. But these last few months have been relatively cold. Can we anticipate ice on the fjords this winter? The answer is yes – and no.

Two weeks ago researchers and students from the University of Tromsø (UiT) and UNIS with partners from Scotland (SAMS) and the United States ended a 14-day polar night cruise aboard the UiT research vessel Helmer Hanssen. On the cruise, a number of physical and biological surveys in Van Mijenfjorden, Isfjorden, Kongsfjorden and Rijpfjorden were made.

So what are the prospects for the fjord ice this year? Last winter we had record-low amount of fjord ice here in Svalbard and the following autumn was unusually warm. The last two months, however, have been relatively cold and this gives us cause for optimism.

Last year it was the hot air temperatures throughout the winter that specifically prevented the cooling of the surface water and thus the formation of ice. So the lack of ice was not only due to the unusual amount of warm Atlantic water in the fjords. Even the otherwise so “ice-safe” Van Mijenfjorden was mostly colored in black on the ice charts last winter. So what are the prospects for the fjord ice this year?

This is what we have documented so far:

Van Mijenfjorden – here there is hope!
The water temperature in autumn was around 6 degrees in the surface. However, now in January, water has cooled down significantly to nearly zero degrees (0.6 ° C) throughout the water column. If the warm Atlantic waters on the continental shelf outside is still circulating in deeper water than the threshold of the fjord (Akselsundet) and the weather remain cold, there is hope for sea ice on Van Mijenfjorden this year. In 2015 we had an ice thickness of about 50 cm in the middle of the fjord outside Blåhuken, in 2016 there was only a little ice in the inner Van Mijenfjorden and thickness was a maximum of 35 cm. By comparison, in 2015 the sea ice thickness was up to 80 to 90 cm in inner Van Mijenfjorden. This year we will probably not get as good sea-ice conditions as in 2015, but better than the ice conditions in 2016 if the weather stays cold.

Isfjorden – no chance
Isfjorden is comparatively hot (2.8 – + 3.8 ° C) throughout the water column now. In January 2016 it was two degrees colder in the surface than in January 2017. The new weather station in the ocean, which UNIS operates shows that water has cooled down by approximately 1.5-2 degrees since December, when the cold weather set in.

Isfjorden is the largest fjord on Svalbard. It is relatively deep and has large heat capacity where we see that the warm Atlantic water fills the fjord from a 70 m depth and down to the bottom. It is unlikely that there will be ice in Isfjorden this year, even if the cold weather continues. This is because Isfjorden does not have a threshold front that can prevent the inflow of hot water from the Atlantic. The exception is side fjords with threshold and thus limited exchanges with the rest of Isfjorden, as Dicksonfjorden and Billefjorden and possibly Tempelfjorden. On Bjonapynten in Tempelfjorden UNIS has set up a weather station with web camera: http://158.39.149.183/Tempelfjorden/index.html. As soon as it gets enough daylight we can follow with the ice settles here.

Kongsfjorden and Rijpfjorden – no and yes?
In Kongsfjorden we see much of the same as in Isfjorden. Here it is just as hot and there is hardly any ice here either in winter. In Rijpfjorden in Nordaustlandet the situation is different. It is close to zero degrees throughout the water column and ice will form within a few weeks if the cooling of the surface layer happens at the same pace as in Isfjorden. Rijpfjorden is much colder than the fjords in western Spitsbergen, and is an important inlet for studying Arctic conditions. By comparison, Kongsfjorden is an important fjord to study physical and biological conditions in warmer climates.

These two fjords are important model systems for hot and cold climates. Two ocean observatories have been placed in these fjords and the observatories continuously measure sea surface temperature and salinity throughout the water column, and have done so now for more than 10 years. These ocean observatories are operated by UiT, SAMS and UNIS and is of great importance in research and management made in Svalbard and the Arctic in general.

Temperatures in Van Mijenfjorden in mid-August 2016 and January 7, 2017. See map for location of the stations. Akseløya is a physical barrier which normally prevents warm Atlantic water to penetrate the fjord if it is present on the shelf outside. Graphic: Ragnheid Skogseth/UNIS.

The fixed stations in Van Mijenfjorden, VMF1 to VMF9, are taken measurements from several times a year. This is part of a larger research project called Faabulous, funded by the Norwegian Research Council, which started in 2015. Faabulous is run by Akvaplan-niva in cooperation with UNIS and UiT and is dependent on sea ice in 2017 to carry out the planned field studies on physical-biological interactions, especially on sea ice and on algae growth inside the ice (see http://www.mare-incognitum.no/index.php/faabulous for more info).

The temperature from the surface to the bottom measured by the weather station IsK in Isfjorden in January 2016 and 2017, and August 2016. It was colder in January 2016 than in January 2017, but the cooling, especially the last month, has been effective in the upper 120 m. The prospect of sea ice, however, is small in Isfjorden. There is too much hot Atlantic water here. Graphic: Ragnheid Skogseth/UNIS. 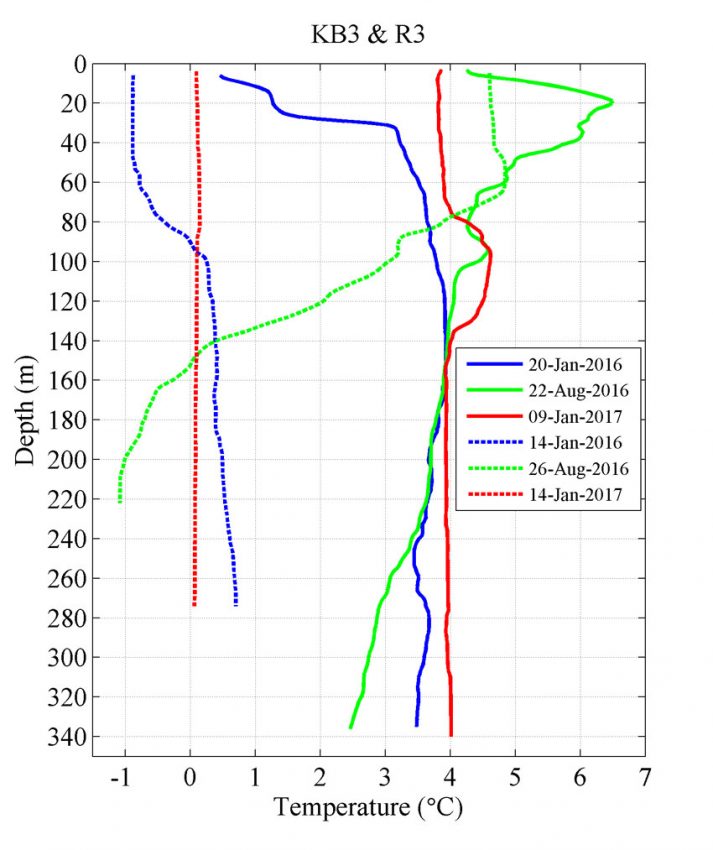 The sea temperatures in Kongsfjorden (solid lines) and Rijpfjorden (dashed lines), in January 2016 and January 2017 and August 2016. Kongsfjorden is up to four degrees warmer than Rijpfjorden. These two fjords are important reference sites for studying Atlantic and Arctic ecosystems. Graphic: Ragnheid Skogseth/UNIS.

The location of sea observatories (star) and stations (red dots) in Isfjorden (ISK), Kongsfjorden (KB3) and in Rijpfjorden (R3).

Crushing ice to save platforms